I need a new BlackBerry!

My trusty BlackBerry 8700 is nearly at the end of its useful life. It’s been in service to me for about eight months; sadly the scroll wheel is almost dead. Eight months is a rather disappointing lifespan for a cell phone, don’t you think? But, on the bright side I can look on it as an opportunity to get a new one! But which one should I get? Research in Motion now has a good lineup of products to choose from…

BlackBerry 8700
I already have one of these, so I’d know exactly what I’m getting. The 8700 is an older model now; it’s the only one left that still uses a scroll wheel. I really miss having decent media support, for example. At 134 grams, it’s got considerable bulk and heft. No, I think I’ll try for a newer model. 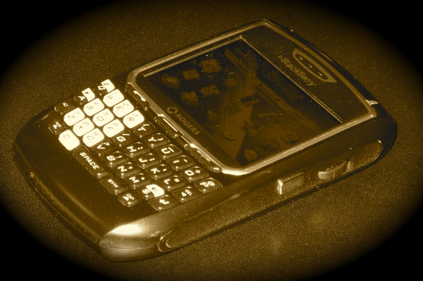 It’s small, light and slick. At only 91 grams, the BlackBerry Pearl 8100 is just like carrying a cell phone.

Cons
– Suretype keypad with shared keys means it takes longer to compse an e-mail, and it’s easier to make a typographical error.

I’ve already owned a Pearl before. It’s a nice cell phone and is good for occasional text messaging and e-mail, but I do too much e-mail in my current job for a Pearl to suffice.

There’s a new BlueBerry on the block. Since the 7290 was discontinued, it just didn’t seem right that there was no BlueBerry in RIM’s product lineup. It’s certainly a nice looking device. It’s got a 2 MP camera and has built-in GPS, which ranks high on the cool scale.

Unfortunately, it’s still in a small form factor with that suretype keypad. No good. I do too much e-mail for that to be practical. Let’s have a look at my real options.

The BlackBerry Curve is a bit smaller than an 8700, but it uses the newer “Pearl” interface.

Cons
– Smaller than an 8700 means smaller keys. Bigger keys would be better for me.
– Grey is an ugly colour. Fortunately, there’s a hot looking red model on the way!
– No carrying case included in the box – only a sleeve.

The Pearl has a big brother that’s all grown up. The 8800 is the model coveted by executives. It’s sleek, shiny and looks expensive. It is by far the most expensive BlackBerry currently available.

Pros
– Nice chassis
– Built in GPS
– Expandable memory
– All the good media features available to the Pearl
– Larger keys than 8310. Unique key shape might make typing easier than on an 8700.
– Longest battery life (up to 5 hours talk time)

Cons
– Chassis looks great when it’s clean, but is a fingerprint magnet.
– No camera
– Quite wide, so it’ll be somewhat awkward to use as a cell phone.
– Has the same heftiness as an 8700 (134 grams)

RIM has provided a handy comparison chart on their website.

So? What do you think?

This entry was posted on Saturday, February 2nd, 2008 at 19:23 -0500 and is filed under technology. You can follow any responses to this entry through the RSS 2.0 feed. You can leave a response, or trackback from your own site.

One Response to I need a new BlackBerry!