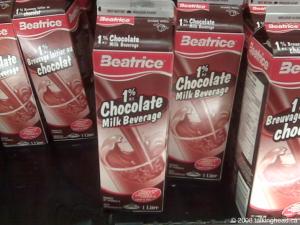 I love milk.  It’s probably the only thing keeping me alive given my absurd diet, or lack thereof.  When I’m eating out or if it’s on sale at the grocery store I’ll often treat myself to a nice tasty Chocolate Milk.  I figure it’s the next best thing to white milk and way better than washing down a meal with sugar water pop.

My first assumption is that it obviously has so many chemicals in it that it can’t legally be called milk any more.  My usual allies Wikipedia and Google have failed me in my quest to identify what it is, and where exactly the line is between milk and milk beverage.  The websites of Beatrice and Parmalat (their parent company) also didn’t have the information I was looking for.  Real chocolate milk is listed, but not their new concoction.  What to do??  Without so much as a press release, it’s obvious they intended to do this quietly.

On November 10th, I decided to send Beatrice an e-mail via their website to get to the bottom of this.

I don’t expect anything more than a canned response, if that.

What really started this whole thing?  Metro’s flyer this week pictured and described real chocolate milk.  When I went to buy some, they’d clearly received skids of the other stuff in the two stores that I visited.  I’m a little miffed.

I started getting a bit worked up about the whole thing while writing about it and decided to send an e-mail to Metro too.  If I bother enough people, someone ought to respond, eh?  The following was sent on November 11th.

Both stores I visited had some older stock of 2L Beatrice Chocolate Milk for easy comparison.  After seeing the frighteningly long list of ingredients in this Chocolate Milk Beverage I decided not to purchase it, despite the attractive sale price.

I look forward to your response!

Metro sent me an automated acknowledgement with a commitment to respond within two business days.

While I wait for their responses, aren’t there some kind of laws that regulate truth in advertising?  It just so happens that we have a little gem called the Competition Act.  Part VII.1 Deceptive Marketing Practices discusses this at length.  I’m no lawyer, but as far as I understand it there are a few relevant sections:

It would, of course, be up to a court to decide if this particular misrepresentation was “false or misleading in a material respect.”

Interestingly this section says nothing about the milk content itself, only what’s allowed in it.  I guess it would be too easy if it said something like “must contain 95% milk.”  Unfortunately there is no mention of ‘milk beverages’ in that document, so I’ll have to assume that Beatrice’s Chocolate Milk Beverage simply fails one or more of the above criteria.  Given the longer list of ingredients, I’m going to go with (e).  I hope it’s not the bacteria thing… eww.

I’ll post an update when I get some sort of response from Beatrice and Metro.  Their customer service departments have a chance to shine by responding promptly, with an informative, human response that actually answers my questions.  Care to place bets?

In the meantime, watch out for substitutions like Chocolate Milk Beverage in place of the real thing.

This entry was posted on Tuesday, November 11th, 2008 at 23:16 -0500 and is filed under food, rants. You can follow any responses to this entry through the RSS 2.0 feed. You can leave a response, or trackback from your own site.